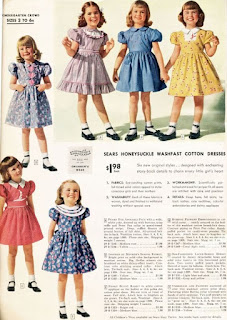 I was always looking forward to Sundays as it was the time when the parents had time to go for a walk and after the walk to a Restaurant and it was great to get a “Orangina”softdrink in a little bottle all for one self. We had a Sunday dress, naturally home made with lots of love by the mothers. Sunday shoes and Sunday socks.  Sometimes after the bath on Saturday evening the hair was put into paper  curlers to have beautiful  curls on Sunday  morning. With the advancing day's activities they would slowly dissolve. Sometimes we were send to church. The parents did not go to church. I did not mind to go. I liked the Organ music and the busy work at the altar. I did not understand the concept of  talking/praying to a “god” I did not know, had never seen, and seemed to live in heaven surrounded by girls with wings, curly hair and white dresses, called angels. It was accepted that they all were female with the expectancy of baby angels which were mainly naked and little baby boys. And god himself was a man.  Heaven was described as something beautiful, where people went when they died and had be good . A concept so abstract that I as a child of 8 was completely confused, but as I still believed in fairy tales it was ok. The world  was a little place were Sundays were special.

Posted by Lavender and Vanilla Friends of the Gardens at 07:04 1 comment: 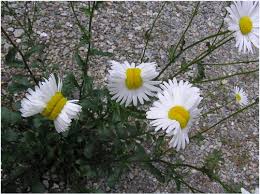 A disaster like Fukushima must not be further reported by  the western
mainstream media , owned by the psychopathic oligarchy. They do not want you to know about it.  Close your eyes and all is well.

Chernobyl’s reactor No. 4 in Ukraine suffered several explosions, blew apart and burned for 40 days, sending clouds of radioactive materials high into the atmosphere, and spreading fallout across the whole of the Northern Hemisphere — depositing cesium-137 in Minnesota’s milk.

Fukushima-Daiichi came 25 years later.
Contamination of soil, vegetation and water is so widespread in Japan that evacuating all the at-risk populations could collapse the economy, much as Chernobyl did to the former Soviet Union. For this reason, the Japanese government standard for decontaminating soil there is far less stringent than the standard used in Ukraine after Chernobyl.
http://www.dailymail.co.uk/news/article-3478891/Dystopian-wastelands-Fukushima-Houses-schools-remain-abandoned-five-years-devastating-tsunami-damaged-nuclear-plant-ex


Yes, what can we do? There are still many, non informed people who advocate more Nuclear Power Plants. Where does stupidity end? Probably as long as it makes a lot of money it never does? Perhaps one day people must eat the money because their might be no food around anymore. Or evolution makes a turn to adapt life on earth to nuclear fallout, if earth still exists. Just as well we will never know,


Courtesy all producers of used sites and photos.

Posted by Lavender and Vanilla Friends of the Gardens at 06:50 2 comments:

A reminder from the good people...

Finally I can login again into my blogs settings, it was all a shamble, it took me a while to figure out what was wrong. 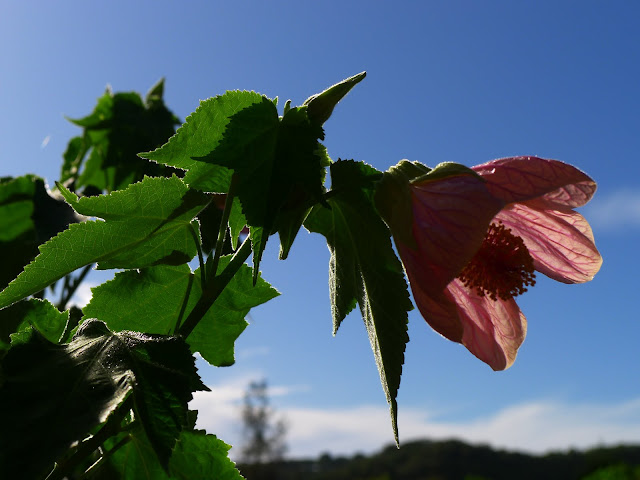 "The corporate grip on opinion in the United States is one of the wonders of the Western world. No First World country has ever managed to eliminate so entirely from its media all objectivity - much less dissent.
"Of course, it is possible for any citizen with time to spare, and a canny eye, to work out what is actually going on, but for the many there is not time, and the network news is the only news even though it may not be news at all but only a series of flashing fictions..." 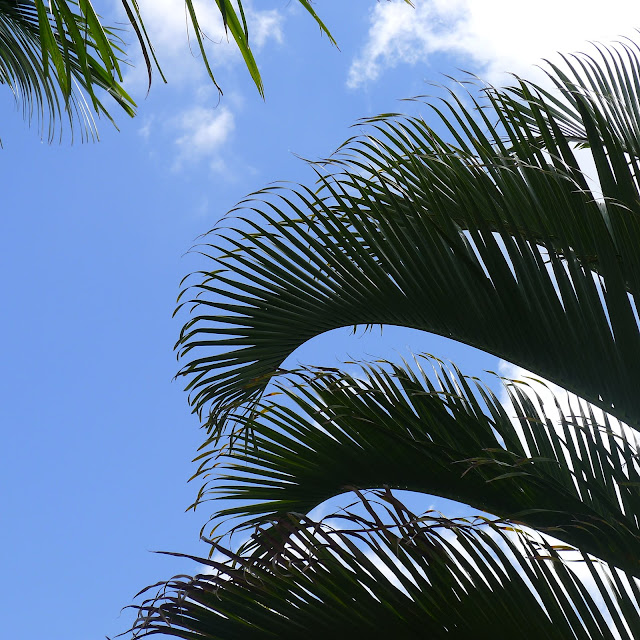 "Next the statesmen will invent cheap lies, putting the blame upon the nation that is attacked, and every man will be glad of those conscience-soothing falsities, and will diligently study them, and refuse to examine any refutations of them; and thus he will by and by convince himself that the war is just, and will thank God for the better sleep he enjoys after this process of grotesque self-deception." : Mark Twain. The Mysterious Stranger 1916. 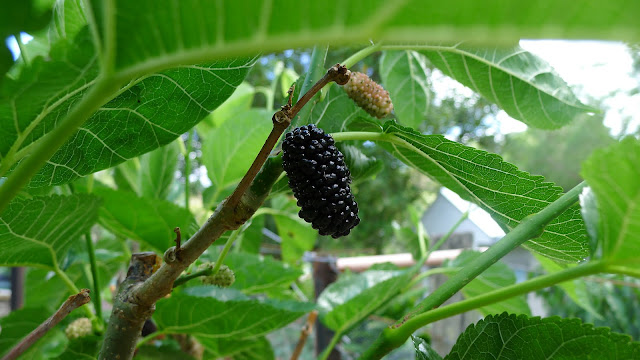 "When a population becomes distracted by trivia, when cultural life is redefined as a perpetual round of entertainments, when serious public conversation becomes a form of baby-talk, when, in short, a people become an audience, and their public business a vaudeville act, then a nation finds itself at risk; culture-death is a clear possibility." - Neil Postman 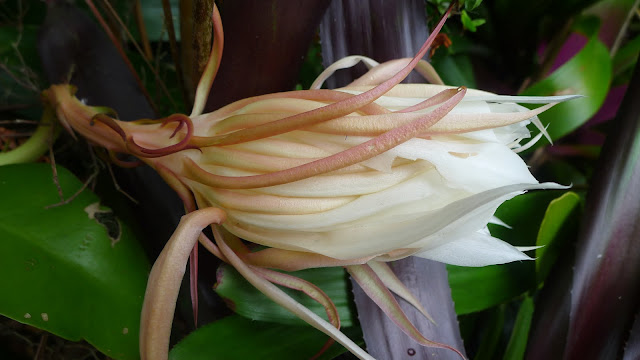 The late John Lennon
"Our society is run by insane people for insane objectives... I think we're being run by maniacs for maniacal ends... and I think I'm liable to be put away as insane for expressing that. That's what's insane about it." - John Lennon, Interview BBC-TV (June 22, 1968)

Photos my garden, Ts Titania Everyday...
Posted by Lavender and Vanilla Friends of the Gardens at 11:04 No comments: 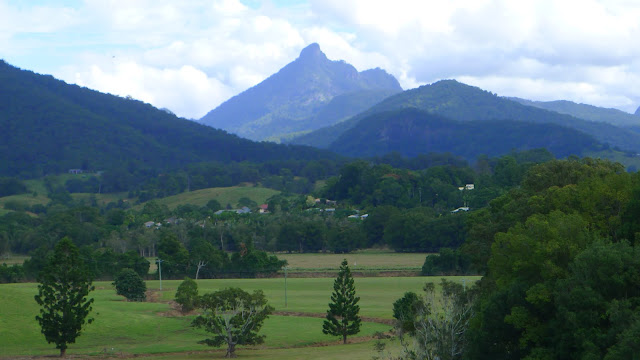 Mount Warning is dominating the beautiful rural area of  the Tweed Valley.

The name Murwillumbah derives from an Aboriginal word meaning "camping place" – from Murrie, meaning "aboriginal people", Wolli, "a camp"; and Bab, "the place of". Nearby Mount Warning and its attendant national park are known as Wollumbin, meaning "Cloud Catcher", in the Bundjalung language. 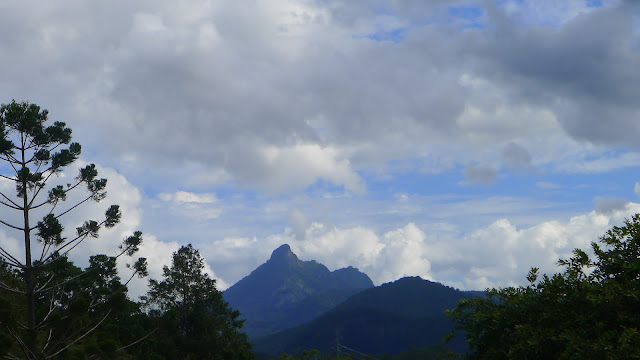 The day was a bit moody, but Mount Warning showed its best side.

Murwillumbah is a town in far north-eastern New South Wales, Australia, in the Tweed Shire, on the Tweed River, 848 km north-east of Sydney, 13 km south of the Queensland border and 132 km south of Brisbane. 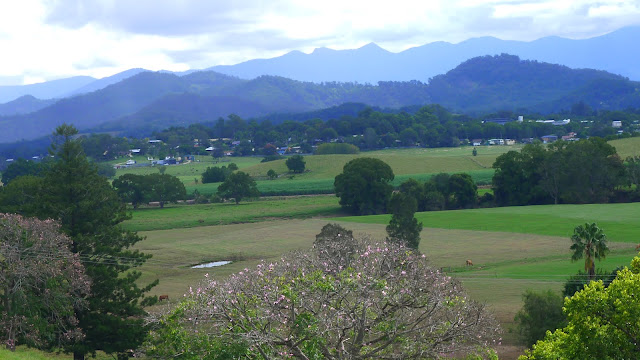 Originally the area was home to the indigenous Bundjalung tribe.

European settlement came in the latter 19th century, with the name Murwillumbah  was the aboriginal name of the tribal lands between what is now the Tweed and Rous Rivers.

The first commercial maritime vessel navigated the Tweed River in 1868 and the cultivation of sugar cane and the surveying of the town soon followed. 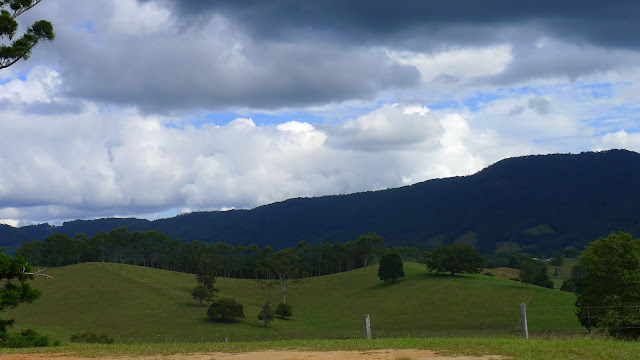 Shortly before the turn of the century Murwillumbah became the terminus for the NSW North Coast railway line.

In 1907 most of the town’s business district was razed by a devastating fire.

But typical of the Australian country people’s resilience, the town was rebuilt with many fine buildings from that period still in evidence today. 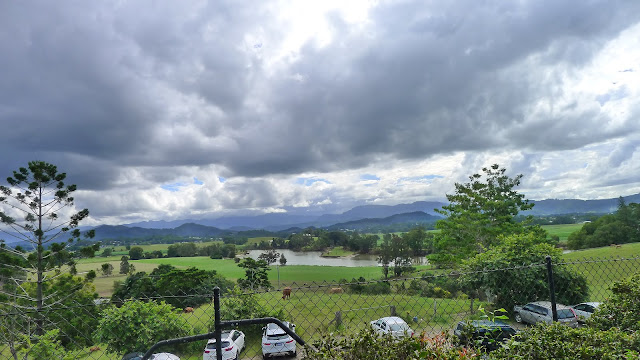 Stormy weather - In 1954 Murwillumbah faced devastation once again as the worst flood in its history inundated the business district and low lying areas around the town.

Water levels reached the awnings of many businesses in Main Street. In 1956 the town was again awash with another major flood, a scene repeated in 1974. Since then levee walls and banks have been constructed to lessen nature’s onslaught. 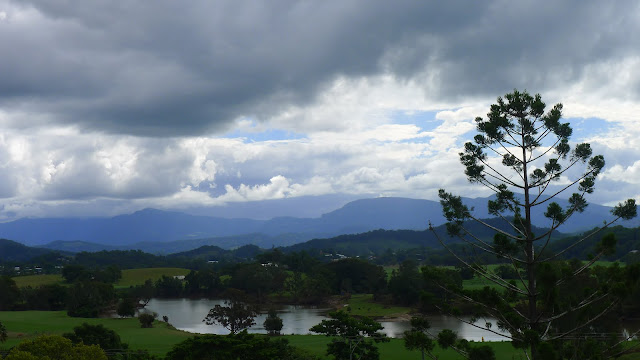 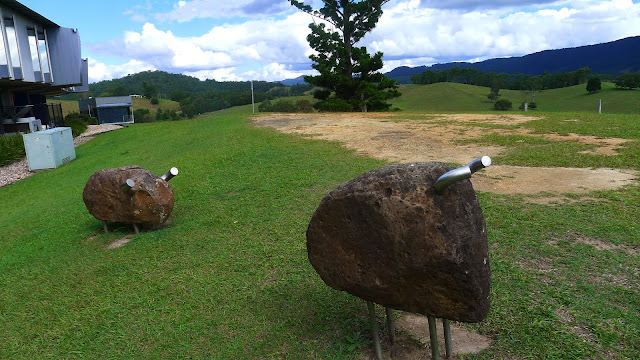 Rocks as sculptures. Make you smile. 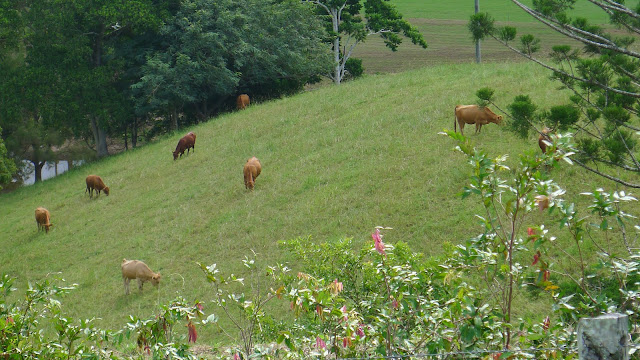 Having lived on a grazing property, rural countryside, grazing cattle, peaceful, as life should be, love  it. 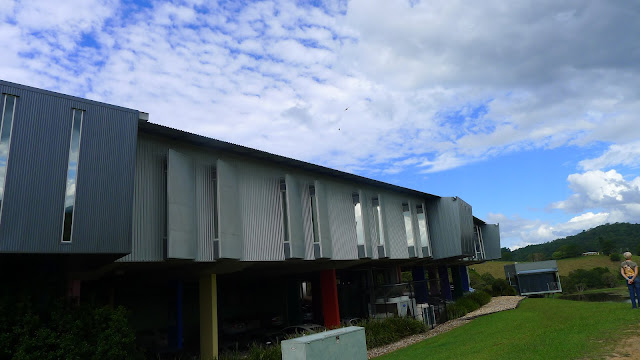 Annexed to the gallery at the back is a neat small building where artists can sketch the country side.


Presume not that I am the thing I was.William Shakespeare

Posted by Lavender and Vanilla Friends of the Gardens at 08:27 No comments: 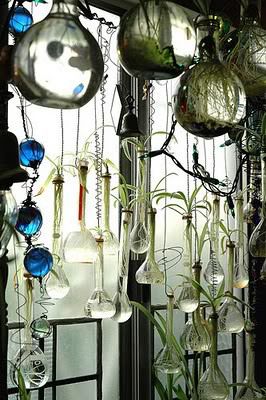 “I wish you all the joy that you can wish.” W. Shakespeare.

Posted by Lavender and Vanilla Friends of the Gardens at 05:41 2 comments: 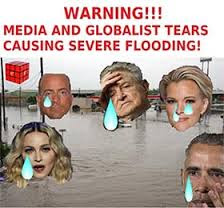 Hello and good bye, that is life in politics, it might be  nothing but a 4 year long term, good or bad after  a while all is  forgotten.

I am not impressed with this media made women’s movement against Mr. Trump,  President elect. It is not important if I like him or not, it is not the issue here.
Women should be conciliatory, peacemakers, not harridans on a warpath. They are out for the kill just like their heroine Miss Clinton was. They should know, that democracy has spoken and all their tantrums won’t reverse it. They must be very ignorant of politics not to recognize the puppet masters behind  the scene.  Let these women do the dirty work for us, and they do.

If this march was for women’s  and earth's issues they should have marched a long time ago and every year.

They are certainly not marching to better women’s life, they should have done that every year, no matter who holds the reigns in Government.

All these performers live in glasshouses and love to hear themselves speak. It seems they even believe their own drivel. Ts

Posted by Lavender and Vanilla Friends of the Gardens at 14:21 2 comments:

From my summer garden; 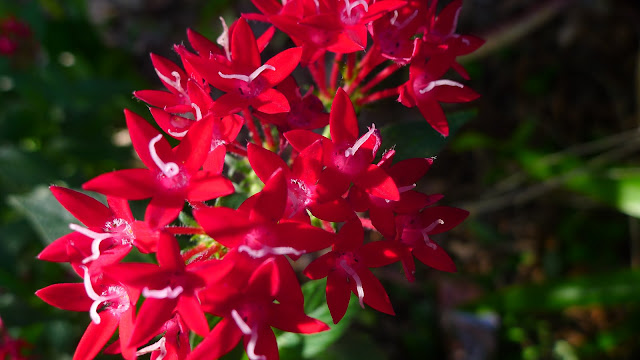 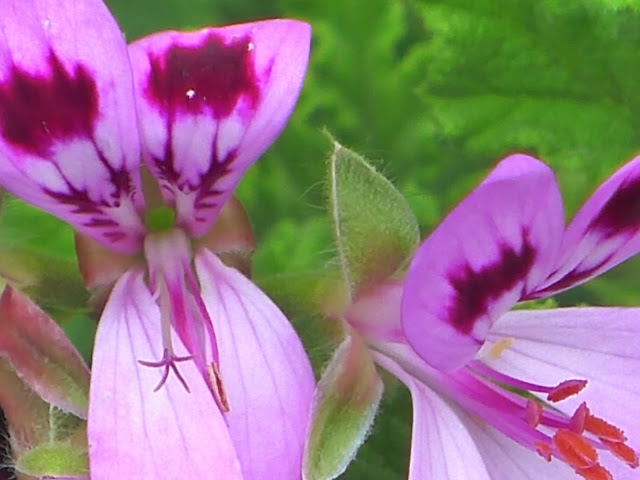 I am a sentimental gardener.
The flowers, trees, shrubs they all hold my dreams my thoughts and sometimes my frustration, but mostly  my heart and soul is pleased. When the time comes to fold their petals the last time,  the softly,  withered flowers or leaves  have a lovely sentimental look about them. Ts 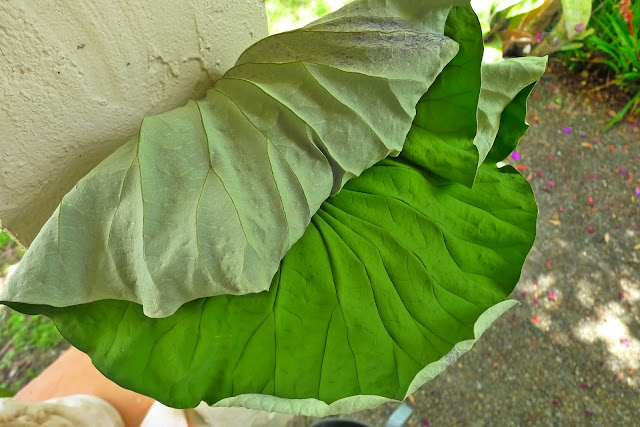 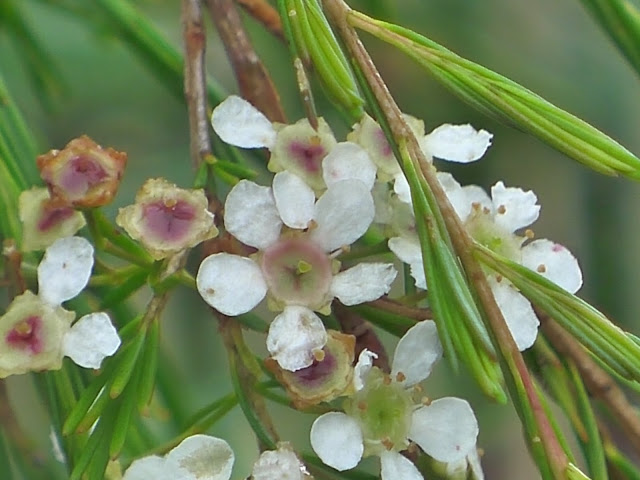 
To forget how to dig the earth and to tend the soil is to forget ourselves. ~Mahatma Gandhi 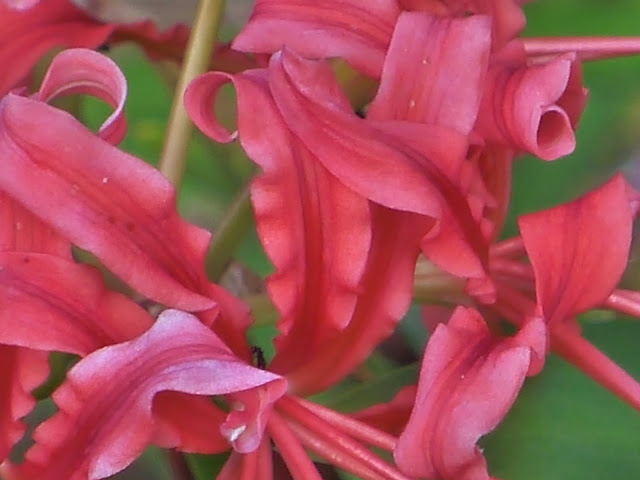 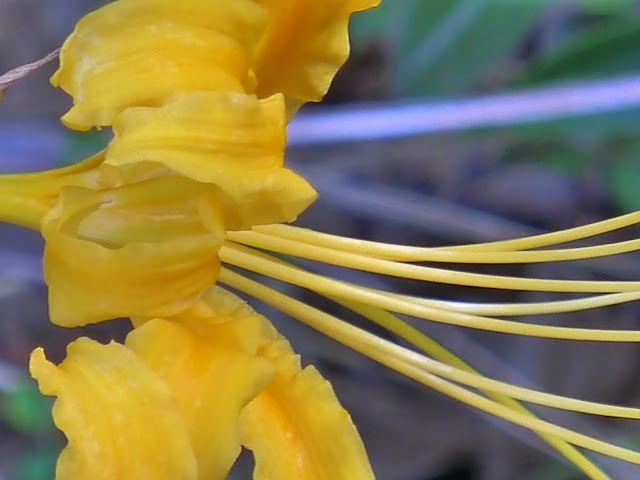 
With rake and seeds and sower,
And hoe and line and reel,
When the meadows shrill with "peeping"
And the old world wakes from sleeping,
Who wouldn't be a grower
That has any heart to feel?
~Frederick Frye Rockwell, "Invitation," Around the Year in the Garden, 1913

©Photos #mygarden  Ts
Posted by Lavender and Vanilla Friends of the Gardens at 16:19 3 comments:

Lavender and Vanilla Friends of the Gardens